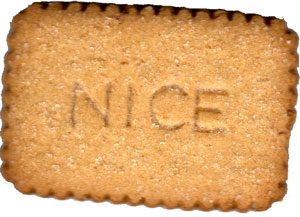 Ok, so today’s post came about because of a comment that a colleague made about me. It was absolutely meant in a complimentary way, but I couldn’t help feeling a bit ugh about it, and it started all sorts of thoughts going on in my head (it had been a long day!!).

The comment was that I was a “nice person”.

Nice. It’s a bit like average. Or OK.  Said in a well-meaning way of course – and there are a lot worse things people could say about someone – but it got me thinking about what does it mean to be nice?  And is it nice to be nice?

To me, I associate someone who is nice as being kind, and thoughtful, and pleasant, and sure they are very positive traits to have. But I also associate it with someone who is a bit placid, meek and to be honest, easily taken advantage of.

It made me think about how I come across to this person.   It wasn’t a person I have a lot of interaction with, but I have spent time with them, certainly long enough for them to form an opinion.

Did they see me as a bit meek?   In my head, I want to be kick-ass!!  A formidable person that commands respect and admiration!!   Not someone who’s a bit so-so.

But maybe so-so is just how I’ve been showing up. Thinking in your head that you’re awesome isn’t enough.  You have to be it.  And you have to demonstrate it.

In future, before I use words to describe someone I’m going to put a bit more thought into it – yes, it’s great to give someone positive feedback, but maybe give a bit more detail and avoid using wishy-washy words.

But I’m also going to look at how I’m going about in the world – is my behaviour reflecting how I feel in my head, whether it’s good or bad? Or maybe I need to kick my own ass before I become the kick-ass!