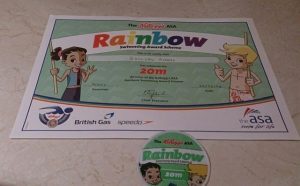 It’s coming up to the anniversary of one of my most proudest achievements…when I swam a length!!!

Learning to swim was one of the challenges I set myself before I turned 40 a few years back.  It represented the thing that I was most afraid of, fearful of,  and had no interest in ever facing.  So of course it had to go on the list!

I should probably go back in time a bit and explain how this came about.  Like most children, I was taught to swim by my parents at the local pool, and used to do swimming classes at school.  I wasn’t a particularly strong swimmer, but I wasn’t bad either.  I certainly wasn’t scared of water at the time.  And then one year, we went to Blackpool and my Dad, my cousin and me visited the Sandcastle.  It was great, a huge bright swim park with loads of slides and pools…and a wave machine.  We were in one of the bigger pools which I remember was pretty crammed, and we had no idea there even was a wave machine..until it started.  We all got separated in the crowd, and I remember struggling to call out for my Dad and started to panic as I was being pulled under the water.  My cousin thought I was mucking about and didn’t realise what was happening. Eventually Dad managed to get to me and everything was fine.  But needless to say, it wasn’t a great experience, and I didn’t want to get into a pool again after that.

Fast forward to many later years when I started to go on holiday with friends, and I would sit on a sun lounger watching everyone else having a great time.  They couldn’t even coax me into a jacuzzi at a spa weekend.  Then I met someone and we would take his daughter swimming most weekends, and again I would go along and watch from the cafe, reluctant to join in.

For people who can swim, it’s difficult for them to understand the sheer panic that you feel when you even think about getting in a pool.  But it also made me realise how much I was missing out on, by choosing to sit on the sidelines and not join in.  Not only that, but I wasn’t even making an effort to do something about it. I had given in to the fear.

When I literally “took the plunge” (sorry!) and started lessons a few years ago, it was really hard.  I felt sick before each lesson and was convinced I was going to drown, but thanks to an amazingly patient teacher, I got there.  It wasn’t pretty or graceful, but I swam my length and got my badge and certificate.  And receiving it was probably the most proud I’ve been.

If there is something that is holding you back, or something you are fearful of, try and think about how your life could be improved by facing it head on.  What could you gain?  What are you missing out on at the moment because of it?   I hope that this might inspire you to take the plunge too! 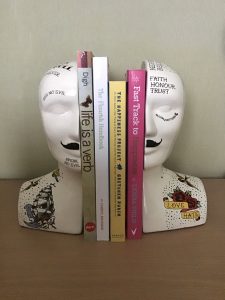 They say that messages will come to you when you are ready to receive them, either in the form of quotes, something someone tells you, or through reading something which resonates.  Here are some of my favourite books, which have appeared to me over the years, and which I still refer back to now (along with countless others!)

The self-help genre can be a mixed bag – from the lightening bolt flashes of “Yes, I get it”, to the downright hard going, which can make you feel like even more of a hopeless case than when you started!

I like a book to have a clear, no nonsense but entertaining approach, with practical tips that I can actually follow and get on board with.   And all of these books are just that.  So if you’re looking for some inspirational reads as the nights start to draw in, these are a great place to start!