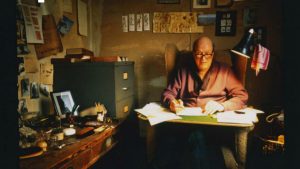 Today is the birthday of Roald Dahl, one of my favourite writers. In fact, I believe that the whole of September is now dedicated as Roald Dahl month, so there have been lots of his lovely quotes fluttering around.
Like a lot of people,  I fell in love with his books, stories and characters, when I was growing up.  Especially Charlie Bucket (and his dad who worked in a toothpaste factory, screwing the tops on). From reading his books, or having them read to me. Or the theatre group who came to perform James and the Giant Peach when I was in infant school. I can still remember being agog at the giant papier-mâché peach and seeing the story coming to life before my wide eyes.
I also love the style of his dark, macabre adult writing and of course, Tales of the Unexpected. I think my favourite one of those was ‘Lamb to the Slaughter’.   I won’t give the game away in case you haven’t seen it, but it has a fantastic twist at the end. Wickedly genius!
But I was even more enamoured by the way in which he worked and wrote.  I think it was a feature on Blue Peter that followed him at his home, and introduced the world to the writing shed at the bottom of the garden.  He would get up and have breakfast and then head off to ‘work’, returning home at lunchtime.  I loved the idea of having this space of isolation to write, but within a comfortable distance from home.  And I admired his discipline of having that routine every day.  I think Mr Dahl would have fared well in these lockdown times…and I wonder what stories it would have inspired in him?
Photo:  The inside of the writing hut has been recreated at the Roald Dahl museum, so that you can be inspired too.  It’s on my (Charlie) bucket list to visit!!